The story of historical Sidney, Nebraska, the toughest town on the western frontier, this 648 page historic documentary book is filled with 69 chapters of fascinating stories, photos and newspaper archives about one of the wildest “Old West” frontier towns that ever existed.

Hot off the press in June, 2006, the colorful period of time from 1867-1888 is captured about Sidney, Nebraska’s early history when over 200 were buried at the memorable Boot Hill. The book authored by Sidney businessman Loren Avey, in cooperation with the City of Sidney, carries the stories behind those that met their demise and were buried in this “Bad Man’s Cemetery.” 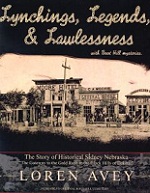 Over 80 saloons along with gaming halls, brothels and the world’s first all-night theater dotted the Sidney landscape when it was known as the Boss City - the gateway to the Black Hills gold rush between 1875-1881. This time frame saw 56 murders or attempted murder cases and over 1,000 additional criminal cases filed in Cheyenne County Court - and those were just the one’s that got caught! The Molly McGuires, the Irish mafia, was running the show and Sidney sported the crookedest county sheriff of them all, Cornelius “Con” McCarty. Sidney created so much news it had three newspapers.

The largest gold robbery in the history of the United States occurred in Sidney in 1880 that today would be the equivalent of a $5 million gold heist. The robbery remains unsolved. In 1881 in an attempt to clean up the town’s evil reputation after threats from the Union Pacific Railroad that it would pull up stakes, a businessman vigilante group rounded up the leaders of the evil doers and were set to hang 16 of Sidney’s baddest of the bad boys and issued a historic document to “Get out of Sidney forever!” Reportedly over 200 fled town after the first thug dangled from a noose around a tree at the courthouse lawn. Other rough frontier hamlets would soon use Sidney’s crime-ridding blueprint to clean up their towns.

Sidney’s rightful claim as one of the Old West’s most famous members in the Frontier Hall of Shame comes alive in this book. Move over Deadwood, Tombstone, Dodge City and Cheyenne, it was Sidney that captured America’s fascination with its romantic connection to the Old West and this book proves it.

Sidney earned the designation from Old West newspaper publishers across the country as the “Wicked Burgh,” “Sinful Sidney,” “The Hardest Hole,” “The Wickedest Town in the West,” and the “Toughest Town on the Tracks.” It was also known as the “Magic City on the Plains” as it would triple in size any given day from transient gold seekers, herders, freighters, cowboys, desperadoes and the likes.

When the town tamed down in later years, the community leadership wanted its tainted past buried with time.That is, until now.